Shoe fetish – yes or no? 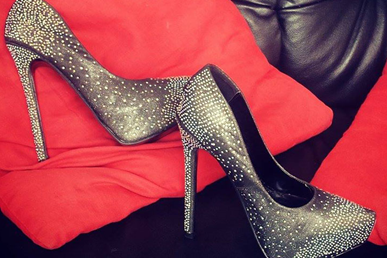 Shoe fetish implies finding them attractive by having given sexual qualities to shoes as a matter of sexual preference.

“I don’t know who invented high heels, but all women owe him a lot.”  Marilyn Monroe 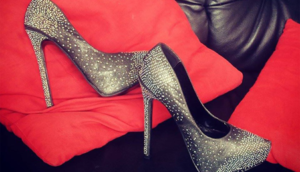 But how exactly does it work?

FACT: One in five women is more excited by a new pair of shoes than their sexual partners, according to a survey by Shoebuy.com.

A new pair of shoes can almost always push the right buttons for us ladies and if you’re the one buying them for us then you just earned yourself big points, especially if you enjoy playing with them later on. Us women, we are such giving creatures when we know what you like and you put us in the right mood.

However, if it’s the whole female-power thing that excites you, ask your girlfriend. What to ask? For example ask if you can pick the heels she wears out on date night. And then choose the shoes that turn you on the most. And if you hook up afterward, ask her to leave the stilettos on.

Is it the kicks that arouse you? Do you have a willing partner? Do a little show-and-tell with your footwear of choice.

Am I the only one who has a shoe fetish?

The shoe fetish is a specific type of fantasy that can come in many shapes and sizes, and stems from an association you probably made in childhood. Whatever the case may be for you, always remember you are not alone!

FACT: An analysis of millions of search queries was accidentally released. If anyone remembers it was during the AOL search data scandal. It showed 64% of all searches that had a preference for an object associated with the body had a preference for shoes, boots, and other footwear. The users were from USA.

Having said all that, ladies remember: having his mind wrapped around your heels does not necessarily require you wear shoes!

FacebookTwitterYouTubeInstagram
Go to Top
We use cookies to ensure that we give you the best experience on our website. If you continue to use this site we will assume that you are happy with it.OkPrivacy policy